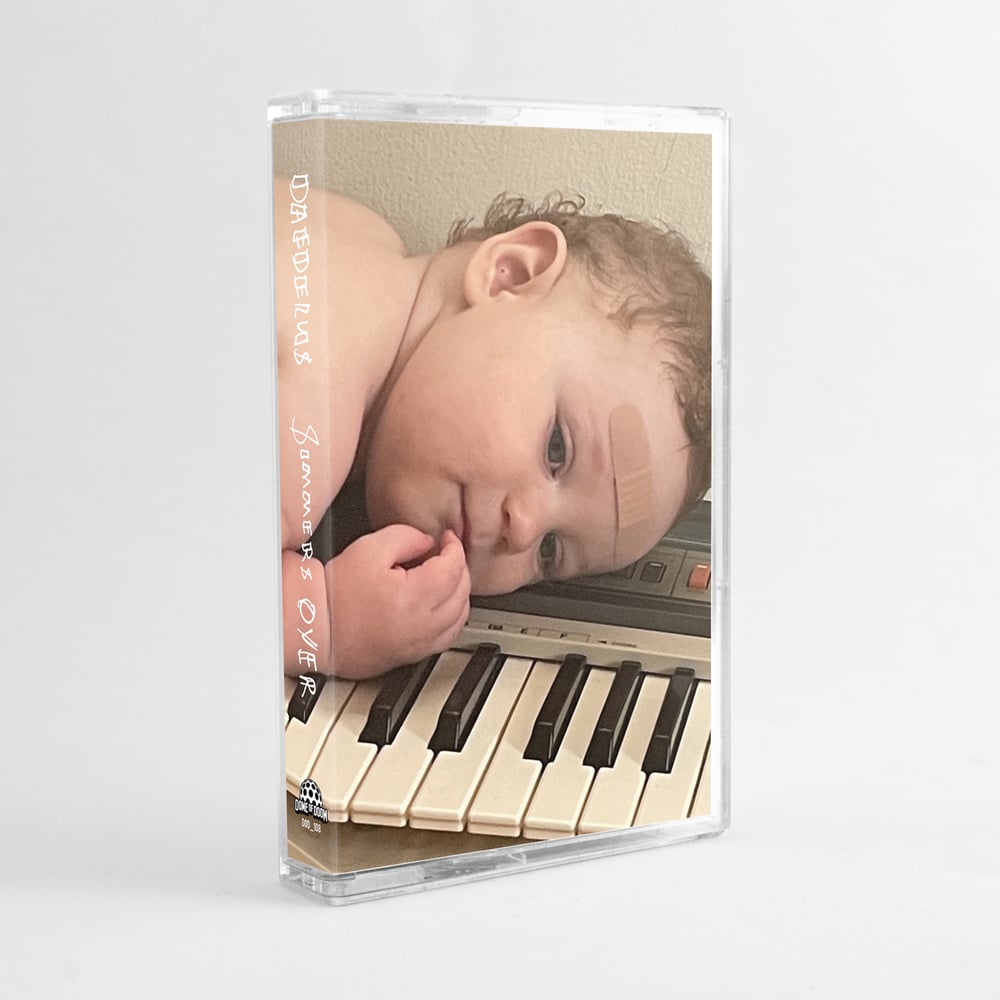 “Delving further into the Saudade I've explored before (highlights would be Denies The Day's Demise, Drown Out, Labyrinths); much of the album sounds uplift and smiles, while the rip current is actually indignation and revolt. So Simmers Over is quite the pot boiling too long.” - Daedelus

Daedelus returns to Dome of Doom for the release of their latest LP, Simmers Over. Scheduled on limited edition cassette and digital formats August 26, 2022, the 10-track and 34-minute record follows the What Wands Won’t Break and What Wands Remixed from 2020 and Holy Water Over Sons LPs from 2021. The music for Simmers Over was composed after the birth of their first child, Clementine, serving as a unique doorway for creative inspiration from the venerated artist, teacher, composer, sound designer, and performer. Clementine features on the album cover “It was a very quickly taken snapshot of the tiniest moment of exploration,” Daedelus adds, “thus the grainy gauzy appearance. Ear to keyboard, the three notes held don't really spell a chord, but black keys in whole steps, who knows how beguiling to Clementine. The injury doesn't deserve much mentioning; trust that the bandaid wasn't for appearances. Nothing was set-up, but soon as I saw what was captured I knew it had to be the cover. As much as the album plays towards the fantastic, it is all very real subject matter, and I think this image expresses that.”

Simmers Over is one of Daedelus’ most harmonically and rhythmically complex albums in years, dynamically shifting worlds from one composition to the next. The music was enhanced with the newly created Ableton instrument, Cody’s Cello Pan, gifted to Daedelus by Los Angeles-based artist Goodnight Cody for testing and album implementation. Simmers Over will coincide with the release of Cody’s Cello Pan to the general public. Where Daedelus' recent LP, What Wands Won’t Break, broke convention from past works, producing tidal waves of energetic power that stripped away the music to its rawest form, Simmers Over breathes with an abundance of color, modalities, microtonal scales, and overtones. Harmonies and rhythms float gallantly in every direction, defined by the light transmitting from their newfound path into parenthood and the energy exchange between student and teacher with their professor role at Berklee College of Music. Infectious, labyrinth-like music that simmers with the deepest of essences, emanating with an undeniable glow.

After After Ever - “Inspired by Dilla's "Donuts" approach of no superfluous samples. It is all about our boy Clementine, and how there is no after this, only newly begun. But also a fun song to begin this plummet with? Hoping a listener could enter this album with no backstory and still get something? Maybe influenced by the strong themes, but never grasping, and that's ok. At least I tell myself.”

Knocking On Adore - “I'd like to say that Knocking On Adore is the sleeper single of the album, it is not the edges of the LP, but a highly focused exploration of a melody in and out of tune and metric modulation of 9/8 and 4/4. Hopefully it doesn't sound just like those technical attributes, but rather something extra sweet that just happens to.”

A Show of Arms - “The voice from a clip of Barry Harris teaching a lesson. I studied Jazz Bass at University (USC's Thornton School of Music), the process of which was revelatory, but ultimately disillusioning. The clip itself shows what music education often is. The transmission of notes from the venerant, where we are then slightly paler / imperfect xerox's of that source. Trying to short-circuit this tendency in my time professing at Berklee, but also subvert the clip here to reclaim their trajectory in my musical life.”

Unctuous - “I've really only every created in twelve tone scales, as baked into almost every piece of music equipment, but this here is composed across a 16 note scale. I feel the future is microtonal. The colors we can paint with will be so much more vivid, and emotions equally lurid. So with Unctuous I wanted to explore an off-kilter ugliness most directly on the album, but without sitting in judgement. Being trapped in Ableton, with tools to allow alternate tunings, made this possible.”

Rips Mask - “Another subtext of the album is borrowing / sampling / stealing / appropriating with utmost care. Here is traditional Pansori drums from Korea meeting mulched drum and bass. Rips Mask as a phrase referring to when the mask comes off and the truth is for all to see, but in this case the reverse where the maskless revel in untruth. The music eventually builds to reflect this hectic conundrum, and eventual dissipation as if nothing ever happened (notice how the song never resolves).”

Slap Dash - “Another loaded term. Slap Dash is usually something that was throw together. Not so much the music here, but rather us all into this huge predicament. The lyrics is French for "Yes, my love..." over and over again. A fragment borrowed from one of my greatest inspirations Michel Legrand. I'm proud of the galloping rhythm here, there is effectively two downbeats, no fun for the djs out there, but for me it's another small subversion.”

Onomatopoeia - “I've probably produced this song dozens of times, or different timeline versions, a multiverse of this approach and mood. That being said each one lands differently, be it bpm, instrumentation, or widely differing, but ultimately steady yearning. Here is one easy instance where Cody's instrument was crucial. It plays the melodic heart dancing center stage. Plus that Clementine cameo at the end is the lasting refrain I'd like the listener to exit the album with.”
credits